In April 1932 the Wolseley Company bowed to the inevitabe and marketed the Hornet in chassis form only to become the Hornet Special. Even more coach builders became involved and the Hornet was now available in a wide variety of guises to suit every taste.

The Wolseley Special chassis was slightly different to the 1931 extended Morris Minor one; which now had 12-inch hydraulic brakes and a 4 speed gearbox with remote control as standard. Other engine modifications included a change to chain drive, which shortened the engine, from the vertical dynamo drive, twin carburettors and an oil cooler. From 1932 these Hornet Specials sported a new radiator design that was characterised by a single chrome embellishment vertically down the middle of the shell.

Some of the Wolseley Hornet Specials were entered into various sporting events of the time, with perhaps the most notable being the 1932 double twelve relay race at Brooklands Race Track at Weybridge. It was here that they won with a respectable average speed of 77.57 mph, with the fastest member averaging 82m.p.h. The winning team was entered by F.S. Hutchens and the supporting drivers were B.H. Wickens and E.J. Erith. The team comprised of two E.W.- Daytona cars (named after the American Beach which hosted world record breaking events) and a 1931 E.W International bodied car (not a Special chassis).

In 1933 Wolseley made some more changes to the drive train making it more robust (and heavier), but the chassis and engine were largely unchanged. The typical cost of an E.W. Special was £298 in 1933. 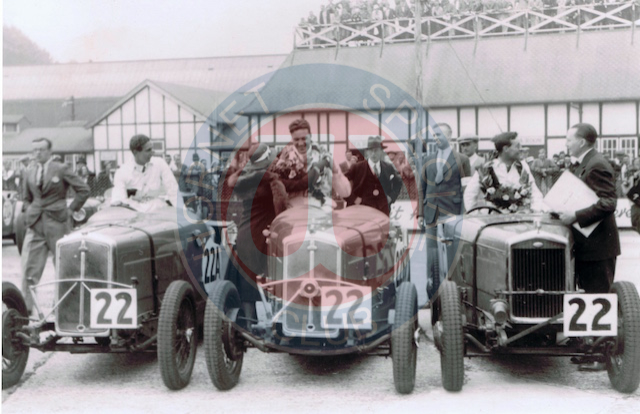 The 3 cars at Brookland Double 12